Posted by: pat 5 years ago

I've been hard at work trying to maintain my commitment to deck maintenance discipline.  I don't want to just flush all of the hard prep work I did this past summer down the drain due to lack of upkeep.

So far this year I give myself an A on leaf control.  My mantra has been "leaves are finite", a philosophy which gives me great comfort.  Heck, if I was so inclined I could count them.  It may feel like a Sisyphean task, but it really isn't.  Every leaf I rake, sweep, and collect is one less leaf I need to deal with later.  This results in more frequent leaf cleanup without fussing too much over completeness, as I know I will be hitting the rake again within 7 - 10 days.  This is as opposed to prior years when I may have packed all of the leaf cleanup into one or two mammoth sessions, by which time many of the leaves have begun to decompose and are more problematic to clean up.  And as it pertains to the deck, the less time organic matter is given to evolve into a self-sustaining organism of slime, the more likely I am to be able to avoid another labor-intensive scrubdown before applying stain in the spring.

I am also for the first time performing interim mild scrubbing of the deck.  I could see that natural forces of wind and rain were doing very little to remove the dirt from raccoon footprints and the drifts of pollen dropped from the birch trees.  If I don't lightly scrub and hose that stuff away, it is only going to breed and multiply.  And then there are the cruddlies, or "seedkins" as I guess they are officially known, which get packed in tightly to the cracks between decking where the crack is on top of a joist.

Anywho, here's the current state of the deck after diligent sweeping and a light maintenance scrub, as of November 18, 2017, just about exactly two months after the latest Penofin application.  You can see it is holding up fine at two months.  I give it another two or three months of looking this nice and then the decline will begin. 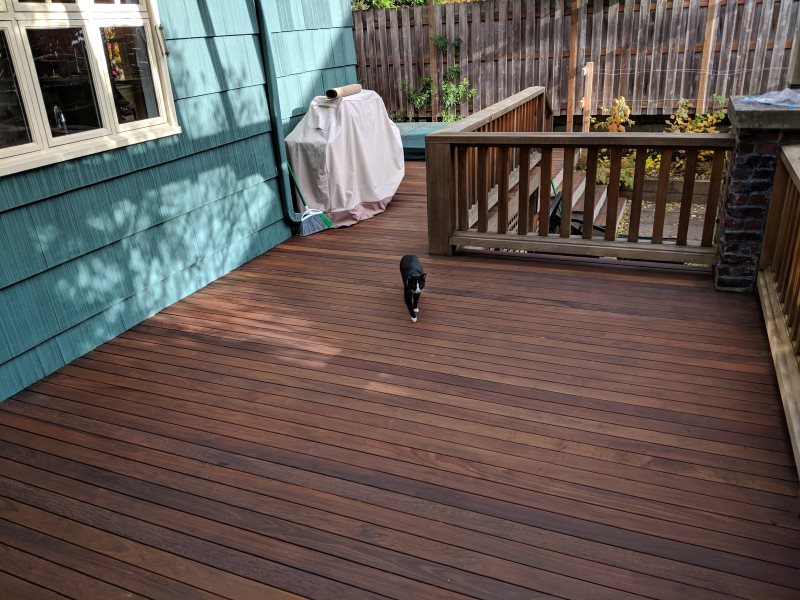