Heading out from Nanaimo to cross the Strait of Georgia you need to check the status of Whiskey Golf.  Whiskey Golf is a test range where the navy conducts torpedo test firing.  If it is active, and you will never know until the day of, then you need to make a significant but not debilitating detour around it.  For some reason this is not universal common knowledge of boaters transiting the area, as evidenced by the VHF traffic where the navy is attempting to hail pleasure boats in risk of being torpedoed.  The day we head out it is inactive so we are good to go.

We are very fortunate on this trip in that we encountered flat seas on both of our days in the thick of the strait, or “the monster” as some call it.  The monster was pretty much the most-studied element of my trip planning.  It represents Mother Nature at her most unbridled and capricious self.  The potential risks and dangers in the strait are part of what makes this trip not just a vacation but an adventure.  I scoured blogs and guide books for tips and tricks, places you can get out of bad weather, criteria for deciding to go up the west side vs. east side, choosing which side of Texada to take, the little protected anchorages at Lasqueti, how to cross the Comox bar, where the tide rips are worst for current vs. wind, dangers posed by the ebb out of Jervis Inlet hitting contrary wind, where can you get mechanical assistance, and on and on.  Good knowledge to have at the ready, but for this trip it was completely superfluous.  That's OK.  This Eagle Scout learned his lessons well to Be Prepared.

The day was hot and calm.  The water in the middle of the strait was a remarkable 65 degrees F.  There is talk of just idling in the strait and going for a swim.

In the interest of family harmony I decided to add another day to our transit to Desolation Sound.  Our itinerary now runs from Nanaimo to Pender Harbor to Lund to Desolation Sound.  This adds one day and reduces some of the longer transit times that can be wearisome for the family.  The risk factors of adding another day working our way up the Strait of Georgia are mitigated by the fair wind forecast.  Steaming up from Nanaimo we had negligible wind and fairly flat seas, and the forecast is for more of the same.  Quite a contrast from the 25 - 35 knot conditions I encountered crossing from Silva Bay to Nanaimo with the grandpas a couple years ago. 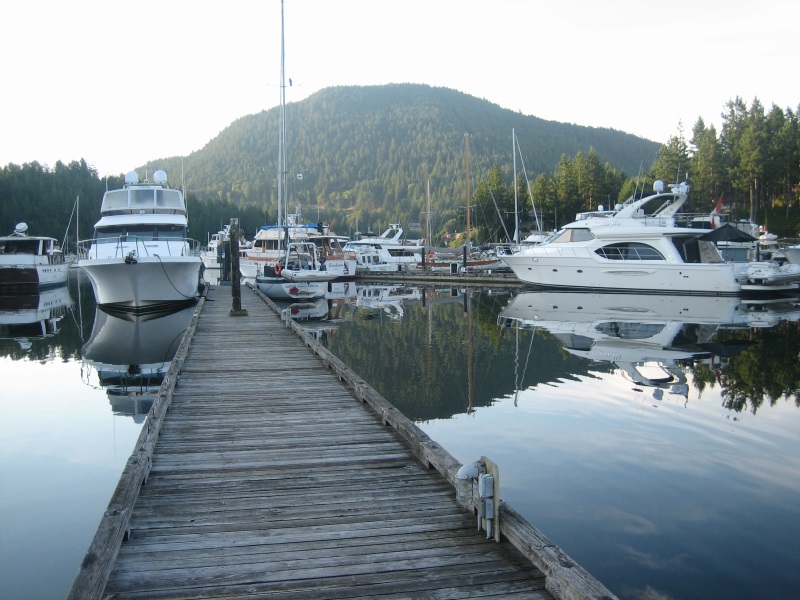 When we were at Hudson Point on day 1 of the trip we ran into fellow Wauquiez owner Guy on Airfare.  I chatted with him for a bit about our trip and he recommended Pender Harbor as a great place to duck out of a blow in the strait.  Well we didn't have a blow today, but Guy's tales of fried oysters in Garden Bay wouldn't vacate my head, so here we are!   I never got the actual name of the place but the description seemed to match what the Waggoner says about the Garden Bay Pub and Restaurant and Marina so that’s where we go.  Turns out no fried oysters.  Must be some other place in Pender Harbor.

Pender Harbor is fascinating as it is composed of probably 6 - 8 separate moorage opportunities plus well sheltered anchorages, and maybe half a dozen restaurants and other businesses.  We moored at the Garden Bay Pub.  The pub was a delight with a nice IPA on draft and solid wifi.  It had the vibe that I associate with a thriving local pub, including that BC phenomenon the weekly "meat draw."  From a moorage perspective it is a bit meh.  The wifi does not reach the docks even with my new super-duper antenna, and the washroom/shower situation is so-so.

The shower is OK but it is one of those situations where there are just two washrooms, with shower, for the whole moorage.  So if someone is taking a shower they are also monopolizing a toilet.  Not a big deal on our visit as there were only maybe 4 other boats at the dock.  There is a curious sign in the washroom stating "In consideration of your fellow boaters, please use your towel to dry the sink and floor after using the shower."  Excuse me?  Maybe you have mistaken us for the RVYC crew next door who I am sure have laundry servants and racks of dozens of towels.  On my boat, I have a towel for showering and a towel for swimming, and I ain't gonna use either of them to wipe down the floor of the marina washroom!  I’m also unimpressed by the lack of door code synchronization.  What possible good reason is there to have each of your two washrooms on a different door code?  Contrast this to Fisherman’s Resort where not only are the codes in synch, but they also are in the form of a clever mnemonic.

We dinghy over to a fairly rustic provincial marine park about 50 yards from the dock.  We tie up at a nice flat rocky area.  Tons of oysters.  The water is warm, about 67F.  We have a great swim.  Two dudes come in on their small sailboat, anchor about 50 feet out from our spot, and dive in for a swim.  We think we should be anchored here and swimming from the boat. 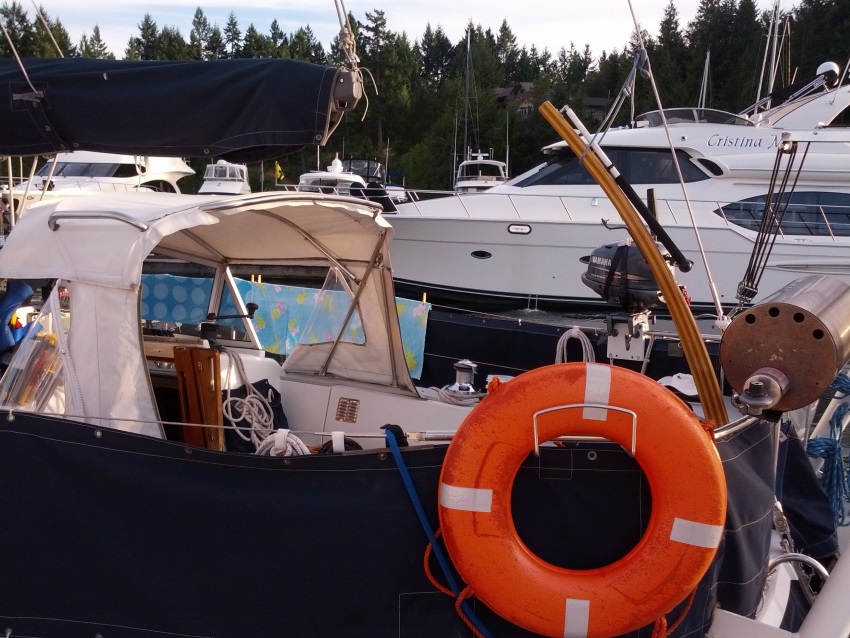 Pender Harbor is home to a couple yacht club outstations.  The Royal Van and Seattle Yacht Clubs both have outstations here.  We were tied up directly opposite the RVYC outstation docks, which while not full had probably 20 boats tied up, probably more than half being in the $ million + 60 foot + powerboat class.  Directly across from us was the Cristina Mia (love the zebra skin upholstery!) which spent hours just pissing gray water over the side.  I guess it was shower time, or laundry or something.

What is it with powerboats and discharging waste water above the waterline?  So noisy and disruptive.  Cristina Mia dumped water literally for hours, spouting from two discharge ports about an inch in diameter a foot above the waterline like a fountain.  I would have had to fill my tanks over and over to dump as much waste as they did.  It wasn't soapy or scummy so I guess they have some filtering or processing on board before discharging it, but it still seems like such a waste...and why exactly can't it discharge below the waterline where it is silent?  I am going to assume there is a solid engineering design reason for this I guess.  Could it be seawater cooling discharge from a genset (but they have shore power here…)?  I guess I don’t know enough about the systems on big power boats.

Back to Pender Harbor observations.  If you visit, do not underestimate the impact of the outstation crowds!  Maybe I shouldn't be watching Below Deck while on this trip, but the RVYC families we ran into while dining at the Garden Bay Pub/Restaurant were a little bit too "right out of Below Decks guests casting."   Petulant coiffed children whining about the wifi while trying to look as sullen as possible and dads with way too much hair gel and cologne.

Actually, before we settled on the Garden Bay Pub/Restaurant we made our best shot at trying the burgers and milkshakes at Laverne's Diner.  I did a recon mission to check it out earlier and noted the unusual signage indicating that they could not guarantee they can serve you if you show up an hour before closing, closing being at 7:00.  Got it!  Show up before 6:00 to be served.  Whatever.

So we show up at 5:45 and are told...oh sorry eh!  We get so many phone orders we can't serve people who actually appear at the restaurant hungry.  For a burger.  I guess this is what the sign was about, but maybe you need to show up 2 hours before closing to get served, or get with the in-the-know crowd and phone your order in when you get up in the morning.  Disappointing, but I guess you have to sympathize with the business owners who get inundated by....I am only going to assume it is the RVYC outstation gang again.  I’ve made up this story in my head where everyone from the RVYC hops north in the summer, and they always stop here at the outstation because wouldn’t you?  That’s what you are paying for in these clubs, better use it.  So they stop here year after year and develop routines, including the traditional takeout dinner from Laverne’s.  Over the years this becomes such a “thing” that you need to phone ahead to have a prayer of dining at a normal dinner time.  What would you do if you ran that business?  Turn away some phone orders to accommodate some walk-ins who may or may not show up?  Reserve some capacity?  Just make the staff stay while you are bringing in cash?  That last one is what I would try...give them a bonus for staying late and make hay while the sun shines.  It must be a really tough challenge running a small business subject to these weird transient visitors who slam you in the summer and leave you all by yourself in the winter.

Dinner at the Garden Bay Pub and Restaurant was decent.  They suffer from being understaffed.  They had a help wanted sign out, something Kim remarked on: “when was the last time you saw one of those?”  It would have been nice to sit on the deck, but that was all reserved on the restaurant side.  The pub side had open tables, but was off limits to the girls.  There is a really nifty private dock right next to the restaurant that is slowly crumbling away.  It has maybe every third board missing.  It looks ready made for filming a dramatic chase scene.  Someone has a little yippy dog that is missing an eye and barks at me on the way up from the dock.  The owner says “oh sorry!  She has a problem with people wearing hats and sunglasses!”  Huh?  Maybe summers are not the best month to take you dog on vacation then.  Later Kim witnesses a local ripping the owner a new one for bringing her problem dog out in public.

The moorage here feels like a bit of an afterthought.  This place is really all about the pub.  On the way back we have a much better experience at Fisherman’s Resort marina on the other side of the little peninsula here.  We walked over from there and had a great time at the pub.

I feel like since we hit Nanaimo we are definitely in the groove of a bunch of boats all going to the same place.  We know August is the most crowded time to go cruising.  It is starting to make me a little nervous about what is to come.  I've read the blog posts about the mega yachts with the loud late night parties and noisy boat toys dominating some anchorages in Desolation.  I fear I am seeing some of them directly across from me right now.

Today was a pretty good day.  We got to go for a very nice swim and put one of the riskier areas behind us.  On to Lund tomorrow!