I haven't brewed in a long time. Not since Memorial Day weekend.  A good chunk of that batch never made it back from Dave's bachelor party weekend at White Pass. All of my kegs went dry about a month ago and I've been living the nightmare of having to purchase commercial beer for home consumption. I even fell for the sucker's deal of 6.99 a 6 pack for Full Sale Pale Ale...it was not a pleasant thing to drink, supporting my theory that beer goes on sale when the brewery made a mistake.  It pains me to pay $20 for a half case of good commercial ale when I can make 5 gallons for about the same expense.  So it is time to put the brewhouse in order and crank out a batch of my old reliable house American Pale Ale (APA).  I'm going to turn and burn this one in rapid fashion so I can free up the carboys for a lager.  Perhaps a reprise of "May the Schwarz Be With You" Schwarzbier.

This pale ale is a recipe that I make very minor tweaks to, but is pretty much the same and always on tap (except for the last month). This time, it is:

Most often this one goes pretty quickly on tap, straight from the primary into the keg. I've drank it 10 days after brewing and it was a bit cloudy, but in the next 3 weeks went to very clear as it settled in the keg.

I take a pretty relaxed approach to this beer. I save my fussiness for lagers where I bother with things like yeast starters, stir plates, whirlpooling, a salted ice water chiller reservoir, and a long secondary fermentation stage.

I batch sparge, and for the pale ale I am transitioning to a method I call "fill er up" where I maximize my mash container capacity. I know I can do about 23 lb of grain with 10 gallons of water for the mash. Then I do a second batch sparge with 7 gallons and end up with about 14 gallons to start my boil. Now in the past I've tried to boil that down until I got to a good 10 gallon batch size...maybe down to 11 gallons or so, allowing for trub loss. That was taking a lot of boil time however. With the fill er up approach I just roll with what happens with a straight 60 minute boil.  So whatever I end up with, that's my batch.  Last time it was 13.25 gallons, necessitating a third carboy for primary fermentation, but so be it.  I take a similar lackadaisical approach to the OG:  whatever it is, it is.  I am happy with anything between 1.048 and 1.058.

I treat my water since the Seattle tap water is pretty bare bones in terms of mineral content.  To 12 gallons of tap water I added 22g gypsum, 2g table salt, and 11g epsom salt to hit a Chico-like water profile that will make the most of the hops.  I also throw a tablespoon of 5.2 into the mash for good measure, and use whirlfloc at flameout.  I take care with my process but am no purist.  As the saying goes, "reinheitsgebot is a four letter word."

For ales, it is just dry yeast for me.  The modern dry yeasts can go head to head with liquid for quality.  The only reason I see to go through the hassle and expense of liquid yeast is for something special where there is no viable dry yeast, like a Bohemian Pilsner.  I love the Safale T-58 for a bit of very light Belgian flavor, and otherwise use the S-04 english ale yeast.  I used S-05 before but thought it was just too clean.

I try to get things setup the night before, sweeping out my little covered back corner that I convert to the brewhouse, setting up the table, getting the propane and burner in place, setting up the pump, and filling the kettle with an initial 12 gallons and treating it, and getting all of my grain ground.  Then in the morning it is a quick heatup to about 165 and I get my mash on and away we go.

Here is the Barley Crusher in action: 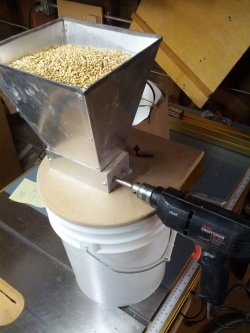 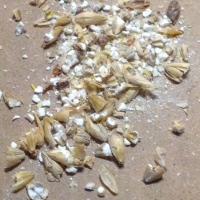 Here is the chronology of the brew day today:

7:45  Got back from driving Betty to school, turned on the propane to get it up to a target of 164.4 per BeerSmith

8:50  Mash started, lid on the cooler.  Had a bit of a challenge with the mash temp.  Overshot to 157, then added too much cold water to bring it down, topped it off with more hot water but only got it up to 150 rather than my target of 152 - 154.  This means I will get a little less body and a little more starch conversion to sugar.  In theory it will make for a cleaner, higher alcohol brew.  My preference would be for a little more malty body to come through, but oh well.

I tossed an extra gallon+ on top of the batch sparge for good measure (more is better, right?) and ended up with 16.25 gallons. The pre-boil OG is 1.039. Beersmith says that after an hour of boil with a 9% evap rate and 4% cooling shrinkage, I should end up with a final volume of 14.2 gallons. Adjusting the gravity for this final volume yields a predicted OG of 1.045. Beersmith estimates my OG should be 1.047 for 14.2g with my grain bill if I hit my usual target brewhouse efficiency of 80%.

This is why I call it the "fill er up" mash: 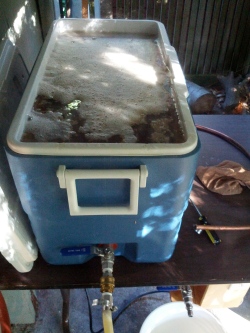 10:45 start of the boil. 16 - 17 gallons is a lot of wort for my little 20 gallon BoilerMaker. I am concerned about boilovers so take the time to skim the foam and run it at a simmer rather than a full boil.

11:30 Put the immersion chiller in and setup the recirc pump so they can all sanitize

11:45 One whirlfloc tablet. I like a clear and pretty beer you can hold up in the sunlight and admire. Repeat the mantra "Reinheitsgebot is a four letter word."

11:50 flameout, final 3 0z Cascade, chill on, took a sample for OG measurement and started the chiller. 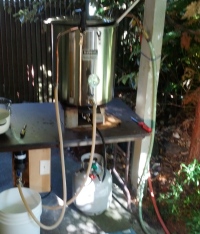 "whassup broseph?"  "not much just chillin"  (sorry I couldn't resist)

13:00 chilled to 68F, pitched the yeast, moved the carboys to the main floor bathroom where they should see 70 - 72F for a good warm fermentation. Usually I would primary in the basement at closer to 65F, but with this being a bit on the weak side I'll take whatever fruitiness or other flavors a warmer fermentation might impart. OG is 1.045 with 14 gallons in the fermenter, which means my brewhouse efficiency is 75% and I should hit around 4.4% ABV when all is said and done. Am I happy with this? No. I plan for 80% efficiency and have hit it pretty reliably in the past, so something is off with my technique. Probably the mash temperature. But hey, I've got 14 gallons of beer in the fermenters, which is nothing to sneeze at! 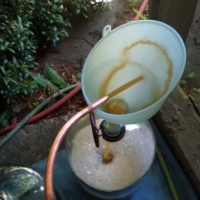 Then comes the cleanup...about 90 minutes of solid toting and scrubbing. This is the drudgework part of brewing. It always reminds me of a Basic Brewing Radio podcast I listened to once where they interviewed a homebrewer who had recently gone pro. He said the first thing they ask in their job interviews is how the candidate feels about cleaning, because cleaning is a major part of the job.

The results with this batch make me wonder how strong of a beer I can do with the simple "fill er up mash" approach.  I'm not sure I will be that satisfied with a brew that clocks in at under 5% ABV.  This time I had 23 pounds of grain...what if I had 26 pounds? The most I have ever mashed in my cooler is 24 pounds.  Obviously I would have a thicker mash and less wort sparged with the additional 3 pounds of grain. I think I will try it next time I do an ale. It will be interesting to see how the tradeoff works: more convertible starch combined with smaller sparges will be a double whammy gravity booster. But no way will it be 14 gallons unless I add a third sparge to the mix. What will I get...maybe 12 gallons of 6% ABV?

I've decided to call this batch "GFG Pale Ale" to honor the role of its benefactor, "Gluten-Free Greg" who provided the 2 row barley. Or maybe it was Maris Otter. Who knows. In about 10 days I'll be drinking it, so hit me up for a pint around the 20th.