Next stop Bedwell Harbor.  We have to clear customs somewhere.  The pro-forma itinerary called for it to be Sidney because it also has easy provisioning at a decent grocery store.  Our last stay at Sidney left us less than enchanted with it as a destination.  It has some nice bookstores and the marina is very well kept, but other than that it isn't really much of a charmer.  We looked at Bedwell as an alternative, to be followed by Nanaimo where provisioning should be fine.

Kim has never been to Bedwell before.  Elizabeth has been there a few times and I've probably stayed there 8 or so times.  It is a destination where we've been shut out without a reservation in the past, especially on weekends.  Poet's Cove, the resort dominating the harbor, has a license to print money with the customs dock being there and it being a pretty spot.  It has many of the amenities we look for in a marina destination:  swimming pool for the girls, decent (not the best) showers, a decent casual dining option, and wifi.  Plus it has a spa, which clinched it for Kim and Elizabeth.

I was a little surprised that they could accommodate us on a weekend with less than 24 hours’ notice, but they could.  This was starting to be a theme…I guess the rumors of that the salish sea boating industry has yet to fully emerge from the toilet of the downturn have some truth to them.

Customs was remarkably uneventful.  And startlingly un-inquisitive.  They knew who we were from the boat’s vessel number…”Just you and the family?  Kim, Elizabeth, and Catherine?” I was not even asked for the quantity of alcohol on board, which was unexpected giving the royal raking over the coals I received here on my previous visit, from the very same Canadian customs officers on duty on this day.  I guess they profile you differently when you are with your family vs. four other forty-somethings.

Poet's Cove is one of the places where garbage has to be trucked off the island by ferry and water conservation is the rule of the day.  No boat washing whatsoever, and there are many signs informing you of how many gallons of fresh water you are entitled to with each night's paid moorage.  If you are not prepared for this and show up with low tanks it can be a frustration.  I know one sailor who planned to install a watermaker after his first summer's cruise in the Gulf Islands.  That is a pretty over the top reaction though.  You can find plenty of water anywhere on Vancouver island.  Just pop into Cowichan or Maple Bay or Sidney.

We were right between two big power boats.  Bedwell is usually about 80% power boats.  The dad on the boat next to us was having fun with his son and a hammock chair suspended from the skiff launch hoist.  He would run the power winch and lower his son down, threatening to dunk him.  Cathy thought this was the craziest funny thing ever, and implored me to get our hammock chair out so we could try to do the same.  I explained it wouldn’t be quite the same on our boat since we don’t have a motorized winch.  And we are still on what I consider the passagemaking portion of the trip where we don’t haul out all of the lazy days cruising toys like hammocks and kayaks and sun shades.  We were going to be off at 6:00 AM the next day!  I can’t be bothered with rigging up hammock chairs to winches!  I appeased her with a promise we would jump into the pool shortly while Kim and Elizabeth hit the spa.

Now that we are in Canada we all went through our phones and turned the data off to avoid the exorbitant $10 per megabyte data roaming charges from T-Mobile.  This trip I purchased a sim for Koodo Mobile who offer a decent monthly prepaid service on the Telus network in Canada.  I got the sim on eBay for $6 and it included a $20 activation credit.  That was plenty to cover basic activation of voice and texts for a month.  For $30 I added 2GB of data so we can have some data where there is no wifi.  With 2GB we won’t be doing any Facetime or Netflix on it, but that is plenty for email, Vine, Instagram, Snapchat, and Facebook checks.  Elizabeth was still in internet withdrawal after two weeks at Camp Orkila.  It proved to be extremely valuable for checking wind and weather conditions and forecasts.  Much easier than having to listen through the whole report on the VHF.  Activation was drama-free, except for having to put in a Canadian address.  I just put the address for Poet’s Cove in, thinking this is my current Canadian address after all.  It took my US billing address for my credit card just fine.

Kim and Elizabeth gave the spa two thumbs up.  Cathy and I found the pool to be not quite as crowded as it has been on prior trips.  Yellowjackets, always an issue at Bedwell, were absolutely rampant and the worst I have ever seen.  Fortunately they didn’t make it out to the dock much, but anywhere on shore they were present in the thousands.

Poet’s Cove ProTip:  when you register and they explain the convenience of being able to charge things to your slip, DECLINE.  We had our departure delayed by over an hour one year so we could clear up a bar tab erroneously charged to our slip.  The waitress had to be roused so she could be consulted. 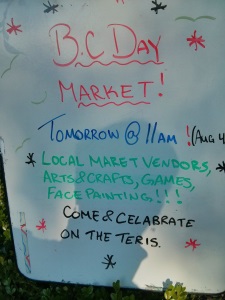 I am guessing this person has never seen the word "terrace" in print, but I can't come up with an excuse for not being able to spell celebrate correctly.  A recurring theme this trip was British Columbia’s perplexing literacy challenge.  I’ll write more on this later as we encountered signs of it being a problem at several stops.

Our meal was OK.  I don't get why the craft beer available in Canada continues to lag so far behind what is being produced in the states.  I’ve never had so many disappointing craft beers as I have in British Columbia, and the selection at the retail outlets is usually quite limited.  I can accept that you pay more in Canada, but I would like to see the quality bar of craft ales go up a bit.  My going in plan for the trip was to just surrender to these facts and go native, subsisting on Molson Canadian, Kokanee, and the other lawnmower lagers for which Canada is famous.

Problem is I can’t stop myself!  The beer list at Syren’s, the casual dining option at Poet’s Cove, taunted me with an item that sounded right up my alley:  Phillips Hop Circle IPA http://beeradvocate.com/beer/profile/2675/58233.  I love a good IPA, especially the “American” IPAs with their high ABV and strong hop-forward flavors.  I’ve tried pretty much all of the hophead ales you might name off the top of your head, including the rare Pliny the Elder.  If you don’t know me, I brew quite a bit of beer myself and often brew IPAs and APAs as my favorite house brew, I’ve entered them in competitions and received positive feedback.  Just pointing this out to establish that I have an experienced palate when it comes to ales in general and IPAs specifically.

Back to Phillips Hop Circle.  For the first time in my life I encountered a beer that I could not finish, and this was it.  It was so horribly skunky.  This is a real thing, skunkiness, and reflects that something has gone wrong.  Usually it comes from exposure to light, which shouldn’t be a problem in a draft beer ever.  Phillips has managed to produce a beer so bad I had to send it back, apologizing for doing so.  This caused a bit of a fuss with the waitress exclaiming “oh yeah, it’s super hoppy eh?  I usually warn people who order that to tell them how hoppy it is and that some people can’t handle it.”  Please stop arguing.  I do know hoppy beers and I can handle them.  Just bring me a Canadian please.

Food was fine, typical pub fare.  Burgers and fish and chips.  Kim was pleased that they had a couple of Indian selections and ordered something that was supposed to have spinach and paneer.  It had neither and resembled a large hot pocket.  Most of it ended up in the trash.  I’ve had good experiences here in the past.  This experience was just marred by that horrible beer.  And the yellowjackets also made their contribution to degrading the ambience as well.  They were so thick that patio dining (which is quite nice here on a good day!) was out of the question.  Indoors they were less of an issue, but we still had to deal with a few at the table.  There were hundreds clustered around the upper windows facing onto the patio.

The showers at Bedwell are hot and strong.  So for water quality they get an A.  The general facility for showering could be improved.  It is definitely one of those “we need to provide pay showers for boaters, so let’s just cram them into the pool washroom/changing room” design approaches.  On the plus side, each shower is an individual little room with a locking door.  On the negative side, ventilation is very poor and hanging hooks are minimal.  They steam up quite badly.  Your towel is likely to be pre-dampened by the steam by the time you need to use it.  The washroom gets thoroughly trashed by swimmers during the day and employees don’t seem to do much about it.  The floor is frequently awash in dirty water.  Good luck trying to shave or do any sink-related hygiene processes with the very fast instant-off faucets.  It did the job but again the little details show a lack of focus on the needs of the traveling boater.

Despite the grumbling about Poet’s Cove, Bedwell really is a beautiful setting.  Many evenings end in brilliant sunsets shining on the boats.  The “magic hour” before the sun goes down illuminates the sheer rock bluff next to the marina with a glowing light and highlights the natural beauty of the madronas that have managed to take root there.  This visit was no exception.  The day ended with a parade of fellow visitors walking out to the end of the finger pier on our slip to photograph the sunset.

Some time when we come back I am going to do the hike in the neighboring provincial park.  Roland Eisner did it one year when he was with me on the “Grandpa Cruise” and said it is worth doing.  Or better yet maybe I will have the gumption to anchor out there and avoid the whole Poet’s Cove enterprise.  I am pretty sure you could dinghy in for a pay shower without being moored there.  Then again probably not as the pool and the spa offer enough delights to lure the distaff members of the family to this destination.

And here is the abrupt end to this blog post.  Thanks for sticking with it to the end.  This is also the end of the “been there done that” part of the northbound cruise.  From this point on all of our stops are brand spanking new to us!  Yippee!