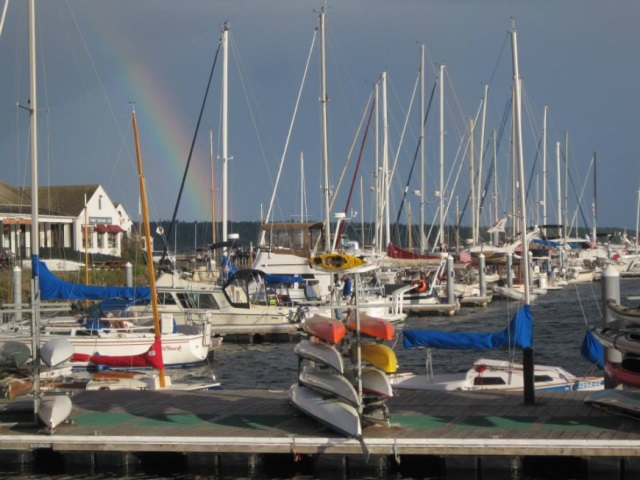 Point Hudson Marina in Port Townsend is without a doubt the marina I have visited most in my life.  I stay a minimum of 4 nights a year here:  two nights for the annual Wauquiez Rendezvous, and a night on either end of our summer cruise.

As the realtors say: "location, location, location."  Hudson Point is a natural transit point for boats going to or from the San Juan Islands and points north.  It is an easy 5 - 6 hour cruise from Shilshole and perfect setup for my tried and true strategy for crossing the Strait of Juan de Fuca:  go early!

In my misspent youth I frequently visited Point Hudson on the family Thunderbird, either for a local Tbird regatta or en route to the islands.  One memorable year I was stupid enough to ignite illegal fireworks on the dock, resulting in a hole being burnt in one boat's canvas cover.  I was still paying that repair expense months later.  I still cringe to think how close those sparks were landing to portable fuel tanks.  I also have many memories of the horrible state of the bathrooms, often featuring overflowing toilets.

As anyone who has visited in recent years can attest, the overflowing toilet issue is just a distant memory.  The bathrooms sparkle and shine now.  I've frequently run into the hard working maintenance dude in there mid-day keeping them spotless.  The docks also went through an overhaul not too long ago and are all top-notch.  The shorter slips are a bit challenging in the wind (look out for slips numbered 25 and higher) due to the minimal turning radius between the commercial dock and the transient slips, but other than that the facilities are all pretty much just what you would hope for.

The showers are very nice and are unique in that you can get the water flowing for a measly US quarter.  Nowhere else can you do this!  It enables a "navy-style" shower for a mere $0.50.  I actually prefer navy-style showers when paying for them.  Sometimes in the cramped pay showers it is difficult to avoid having all of your lathery suds rinsing away before you've scrubbed the sweat and sunscreen off.

The location is also very convenient to the historic retail zone, the skate park, and a short stroll on the beach to Chetzamoka Park.

Port Townsend is one of those rare stops on the boat where you can actually find a decent restaurant serving more than fish and chips, burgers, and pulled pork.  Some of our favorites are Alchemy, Sweet Laurette, and Lanza's.

There is really only one nightlife spot worth mentioning:  Sirens.  Up several staircases with a great deck facing the bay, Sirens is pretty much the only place to go after 10:00 PM.  They have an..."eclectic" live music lineup.  You may see some blues-infused klezmer or a jugband attired in period dress, or see the locals grooving to Kid Rock on rockaroke.

We miss the absence of the now closed Salal Cafe for breakfast.  The Point Hudson Cafe is OK, but the breakfasts at the Salal were wonderful.

I disrecommend the Chinese restaurant at Point Hudson, and the Sarape Mexican restaurant.  Both represent the most mediocre of their respective cuisines.

While there is a lot to like about the Point Hudson Marina, almost all of its positive attributes basically boil down to its location and the quality of the infrastructure.  Marina operations and policies leave a lot of room for improvement in being boater-friendly.

Two points on the infrastructure:  (1)  the wifi is an embarrassment.  In the marina office they will tell you the password for the wifi and warn you "it is pretty spotty."  On my most recent visit I challenged them a bit on this, letting them know they have been giving this same lame warning literally for years.  The response was a less than heartening explanation that that was something the people in the administration building handled, aka "not my department."  When the only direct contact your customer has is with someone with a "not my department" philosophy, there is a missed opportunity.

Good wifi is a solved problem (just not in Port Townsend).  There is certainly more to it than turning on the wifi on a dlink router and calling it good, but plenty of larger marinas provide free wifi over a much larger footprint than Point Hudson.  Gorge Harbor provides world-class wifi coverage over their entire extensive grounds.  The only reason to continue to provide such poor service for years on end is simply that they don't care.

Second point on the infrastructure:  bathroom sink areas.  This is a really minor and nitpicky point, but the sink areas could be improved.  As of now they are pretty much only functional as hand-washing stations.  There is no shelf or counter space to put shaving cream, toothpaste, or any other personal care items.  A couple of hooks are all you get.  This is all mitigated by my gradual realization that in most cases, anything other than toilet and shower use is better when done on the boat.  Toothbrushing, face washing, shaving are all easier on the boat.

Point Hudson charges a $7 reservation fee.  This is pretty steep, and it is not a generally accepted fee or practice across marinas.  I think Friday Harbor also charges a reservation fee...but they also only reserve a fraction of their total slips.  Without a reservation for a weekend night in the summer at Point Hudson you absolutely will be shut out most of the time.  I can't think of any justification for this policy other than to maximize the extraction of dollars from boaters' wallets.  Take my credit card info and charge in full for no-shows, but don't drown me in "convenience fees."

These anti-consumer policies and the "not my department" syndrome are found in some municipal dock operations.  Many do a wonderful job welcoming boaters (Lund, Friday Harbor, Cowichan, Chemainus) but others fall short.  I would put Point Hudson in the same ranks as Victoria and Bremerton for not being very customer-focused.

Well that was a lot of general info and bitching and moaning, but what about our visit on August 1, the first day of our 4 week journey?  It was fine.  A little cool and cloudy, but that was kind of a relief after all of the hot weather we had in July.  We sailed a little on the way up.  I had a reservation for slip 25, a port tie which is good for the prop walk from my left-hand rotation propeller.  Docking was drama-free, owing to the negligible wind and my recent practicing of the "back and fill" method of spinning the point in place.  After reviewing the french bistro menu at Alchemy (a favorite for the rendezvous mancation weekends) and rejecting it as not being kid-friendly, we climbed the stair to uptown for dinner at Lanza's, a good italian restaurant I discovered last year when coming back with Anders and his brother.  Everyone enjoyed their meal and leftovers were taken back for the next day's lunch.

We ran into fellow Wauquiez owner Guy on Airfare.  He and his wife were heading back south (aka "the wrong direction") after a short cruise.  We talked about our plans for making our first trip to Desolation Sound, and Guy commended Pender Harbor as a great place to stop on the way or to wait out the wicked southeasterlies that frequently plague the Strait of Georgia in the summer.  He also recommended a pub with deck that served wonderful fried oysters "if you're into that"...YES SIR I AM!  We'll get back to all of this in the Garden Bay post to come in a few days.

Elizabeth once again made her voice heard with the observation that the trip was going to be too long, and she had just got back from two weeks of not seeing her friends and having no internet or phone at Camp Orkila.  Our original "pro forma" itinerary called for us to blaze straight up to Sidney on day 2, clearing Canada customs and stocking up on provisions there.  As a peace offering I allowed that we could afford to make a stop somewhere in the San Juan Islands before crossing to Canada.  Kim just required that it be anywhere but Roche Harbor.  Elizabeth proposed Deer Harbor, an old favorite.  I called (they also book up quite a bit in the summer) and they had space, so I nabbed it.  I plotted our course in OpenCPN and uploaded it to the chartplotter.  Cattle Pass currents wouldn't be a problem, but we would be transiting the area around Point Wilson at max ebb.  This would give us a big push north, but the Point Wilson Rip is a notorious hazard when the wind is up from the west during the ebb.  All of the water flowing out of Puget Sound gets up to 3 knots of current as it takes the big left turn for the strait.  When this flow is counter to a big westerly you get truly dangerous conditions.  Fortunately the forecast didn't call for the wind, and the good thing about tide rips is that they are very localized:  keep plugging through them and you do get through them in 30 minutes or so.