On the Nanaimo Bar Trail

I've long been a big fan of the Nanaimo bars sold at our neighborhood Ken's Market. What a delightful confection. Kim and I contemplated making them once, but as Boromir might say:

It involves a double boiler and takes more than a day what with the need for stuff to chill and all.

Fortunately we are taking a layday in Nanaimo for provisioning, which affords us the opportunity to take a journey on the Nanaimo Bar Trail (no I did not just make that up, check the link to the Nanaimo Tourism office site for all of the details and a map) in search of the platonic ideal, the ur-bar.

The first bar comes from Javawocky and seems to be a great example of the traditional preparation. Much thicker than the bars from Ken's, but I was expecting that. The coconut us discernible, the custard layer creamy and thick, and it looks like it has walnuts. The official recipe calls for almonds, but I think I might prefer the walnuts. Overall, a great bar and no complaints!  On another note, I found the drip coffee from Javawocky insipid and weak. 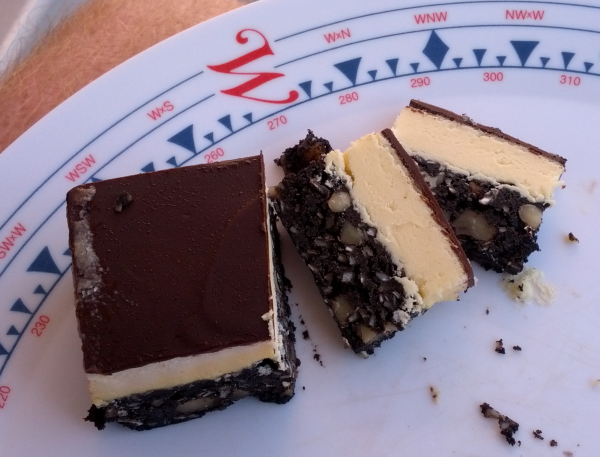 This was supposed to be a long post wherein I described in detail the virtues and shortcomings of a dozen or so different Nanaimo bars....but it was too darn hot!  The thought of pounding the hot pavement and scarfing down sugary confections became more and more nauseating as the temperature climbed.

I will say that the Nanaimo bar gelato at the gelato shop on the esplanade is delightful though.  Elizabeth and I both enjoyed it very much.